Chinese mini PC maker One Netbook has introduced a third version of its ONEXPLAYER Mini portable gaming PC. The first model was released in January with an Intel Core i7-1195G7 Tiger Lake processor under the hood. It was followed earlier this month by an AMD-powered model featuring a Ryzen 7 5800U processor.

Now, One Netbook has introduced a new model with an Intel Core i7-1260P Alder Lake-P processor. This is on pre-order in China for CCNY 7,999 (~$1255) and up, and it’s not just the processor that makes this model stand out.

the ONEXPLAYER Mini Gundam RX-78-2 is also the first device from One Netbook to feature a 12th generation Intel Core chip. The company opted for a 28-watt, 12-core, 16-thread processor with four Performance cores and 8 efficient cores and Intel Iris Xe graphics with 96 execution units and support for GPU speeds up to 1.4 GHz. 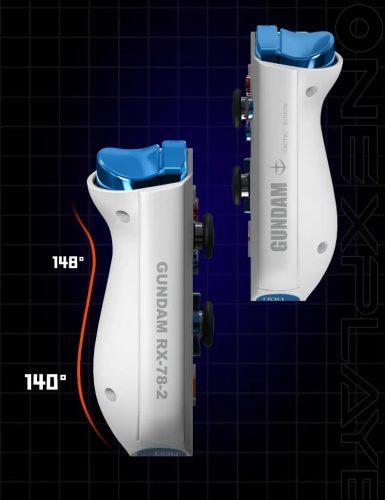 Other specs include USB4 ports, PCIE 3.0 x4 NVMe storage, LPDDR5-5200 memory, 48Wh battery with 100W fast charging, WiFi 6 support, active cooling. The handheld weighs 619 grams (about 1.4 pounds) and measures 260 x 106 x 23 mm (10.2″ x 4.2″ x 0.9″), making it considerably smaller and a bit lighter than a Steam Deck, although I suspect the last number refers to the the finer point of the handheld and ignores how the rounded handles take up more space on the sides.