It’s no surprise that mobile gaming is growing in popularity: with games like Call of Duty, PUBG, Minecraft, Among Us and Fortnite in their back pocket, fans are hungry for more content.

There are several methods to stream games from your phone or tablet. The easiest solution would be to use the Twitch app or a third-party solution such as Streamlabs.

However, streaming apps aren’t your only option: you can stream through your mobile screen by casting it to your computer. Unfortunately, this can be quite complicated, especially since there are applications that perform the same functions as desktop software.

The two main questions here are how to stream from your phone to Twitch and what equipment you will need. Besides a mobile device, you will need a Twitch account and a mobile game to stream any of the walkthroughs.

Screen casting would require the use of a computer, microphone, headset, webcam, and additional software to sync everything. That’s why we’ve focused on mobile-centric solutions to stream when and where you want, using only the gear in your pocket.

Installing an app is probably the most convenient way to stream mobile games on Twitch. While there are plenty of options for iPhones and Android phones, we recommend using StreamLabs or Mobcrush to stream directly from your mobile device to Twitch.

1. Mobile streaming with the StreamLabs app

The app is available on Google Play and the App Store, allowing you to use it on Android and iOS devices. You can get it for free and start your live broadcast in just a few steps. After downloading and installing the StreamLabs app, follow these steps.

You will be redirected to the main application window after logging in. The Stream icon is in the upper right corner of the window. Wait for a dialog box to appear on the screen after tapping on it. A prompt will inform you that whatever is displayed on the screen will be recorded and you can start streaming by tapping on the Start Now option.

Once the stream is active and the app starts capturing the device screen, tap the three-dot icon and select the Edit stream information option to give your stream a name and describe what you do during the stream. When you’re done, press OK to move on to the game of your choice.

2. Streaming with the Mobcrush app

Mobcrush, like StreamLabs, can be used to stream mobile games to Twitch from devices running iOS and Android. To start a new live stream from your iPhone, first enable the Screen Recording option in the Control Center menu. You will also need to enable Access in Apps option if you want Mobcrush or any other live streaming app to record your activities while playing your favorite mobile game.

When you first launch the app on your smartphone or tablet, you will be prompted to log in with your Facebook, Mobcrush or Google account. Since the app currently only allows you to log in to your account, you will need to visit the Mobcrush website to register. If you want to stream regularly on Twitch, creating an account on Mobcrush and using it to log into the app is probably the best option. 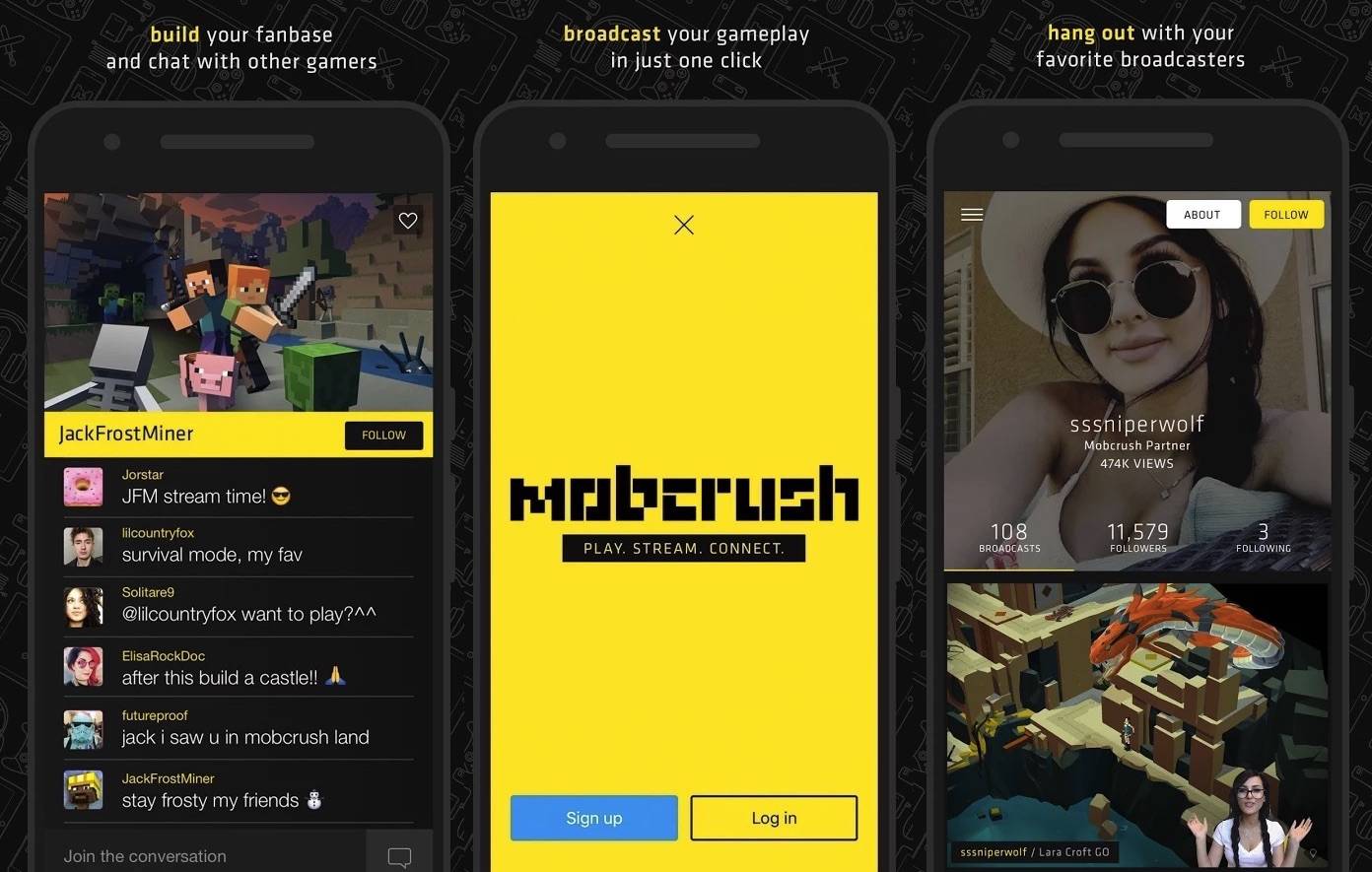 The app’s main window displays streams from other users, allowing you to watch other Mobcrush users play mobile games. To start a new stream, tap the hamburger menu in the top left corner of the screen and select the Stream option. A new window will appear, prompting you to select the platform you want to share your live stream on.

Twitch, YouTube, Facebook, and Mobcrush are your options, so select Twitch to start setting up your first live stream. If your Twitch account is not already linked to the app, you will be prompted to log in and uncheck any other options if you want the stream to be available only on Twitch. All broadcasts made with this application will be automatically broadcast on the Mobcrush platform.

Check out the best apps to go live on Twitch!!

Following the selection of the live streaming platform, you can proceed to the game selection. The application will provide a number of popular games, and if the game you are playing is not available, just press the another, and the name of the game will be displayed to viewers during a broadcast. After that, you can enter the live stream title in the broadcast title bar and enable chat messages. To finish setting up your live stream, click the Save Stream Settings button.

Now you need to launch the game you are going to play after adjusting the broadcast settings. Swipe up when the game starts to bring up the control center, then tap the screen recording icon when the menu appears onscreen. Choose Mobcrush and if you want to record audio, select Microphone Audio feature. When you tap the Start Broadcast button, your live stream starts in three seconds, giving you plenty of time to get back to the mobile game you want to play. Just tap the red timestamp to end the broadcast, and now you can enjoy live streaming your favorite mobile games on Twitch.

Install the Reflector 3 app on your iOS or Android device, then use it to connect the smartphone or tablet to a computer. On iPhones and iPads, use the AirDrop feature, while on Android phones, use the Cast option to connect the two devices.

After successfully connecting your Smartphone to a computer, run the live streaming software on the computer. Choose Twitch as your live streaming destination and add media sources to OBS so that anything streaming from your mobile device to the PC can be watched. After adding all the media sources you want to your stream, click the Start Streaming button.

Simply tap the camera button in the top navigation bar to access streaming on the Twitch mobile app. You can choose between Stream IRL and Stream Games. You can read our guide for more information.

Yes! Third-party software or projecting your smartphone screen to your laptop are two options for using the Twitch app. Using programs like Streamlabs, on the other hand, involves minimal setup, additional hardware or software – all you need is your phone and a game to stream.

Using Twitch’s “Inspection Tool” to run a test stream can help you analyze the quality of your stream before going live. This can allow a streamer to focus on their content instead of dropping frames or having a connectivity issue.

In the Quick Actions tab of your Creator Dashboard, click “Edit Feed Info”. Using this option you can edit your title, category and tags

From your Xbox One console, navigate to the “Capture and Share” tab of the guide and select “Live Stream”. You will need to link your Twitch account by scanning the QR code with an iOS or Android mobile device or by navigating to the URL with your PC or mobile device. Once your account is linked, select the “Go Live Now” button to instantly go live and start downloaded live games on your console.

Many of the most popular games on Twitch also have mobile versions, so you can play famous games like Hearthstone or Minecraft on your smartphone. And share your successes in real time with millions of people around the world.

What is your favorite technique for streaming mobile games on Twitch? Please leave a comment to let us know.

Also read: The best smartphones to go live on Twitch.